You are here Sure unveils 2020 Directory cover 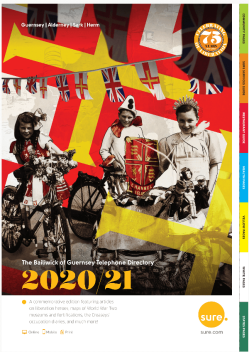 Sure is proud to reveal that a photo of three children attending the inaugural celebration of Liberation Day in 1946 is the image on the cover of its 2020/21 telephone directory.

The image, which is believed to be of brother and sister John and Elizabeth Taylor posing next to Hazel Carré, was taken on 9 May 1946 – exactly one year after the Channel Islands were liberated from the German occupation.

The trio formed part of the Liberation Day Parade Cavalcade, which started at the Halfway and finished at the White Rock, and competed in the ‘best decorated cycles with cyclists in costume’ competition. Elizabeth, who won her class, decorated her bike in the theme “Guernsey 1746” and dressed in old-fashioned costume. The Guernsey Press reported on Friday 10 May 1946 that Hazel Carré was one of the first entrants to come into view of the cavalcade riding her decorated bike which bore the insignia of ‘Our Liberators’.

Sure sourced the image from the Priaulx Library, working with the librarians to discover the story behind the image and the children featured. In later years both John and Elizabeth moved to Canada while Hazel, who was evacuated to St Helen’s during the war, spent the rest of her life in Guernsey and contributed to the local arts and dancing scene.

Phil Rowe, Hazel’s son, said: “I was astonished to hear that a photo of my mother as a child will be on the cover of this year’s telephone directory. Guernsey’s history and liberation are topics that really interest me and I have several old photographs of my mother as a child, however this is the first time that I have ever seen this image. My mother was a dancer and heavily involved in the dancing community so I’m not surprised to see her dressed up in costume for the first ever Liberation Day celebration in 1946.”

Mike Fawkner-Corbett, Head of Consumer at Sure, said: “We’re so pleased that we were able to confirm the islanders who are featured on the cover of the Sure 2020/21 Directory. A key priority for us when selecting the cover image was to pay tribute to 2020’s 75th anniversary of Liberation Day. Despite spending this year’s celebration in lockdown, we recognise that the island is in the fortunate position to experience more freedom than other jurisdictions across the globe and we felt that selecting an image associated with the first Liberation Day celebration presented an accurate reflection of Guernsey’s spirit.

“We’d also like to thank the Priaulx library for their help and support in providing information on this image.”

The Sure 2020/21 telephone directory will be available to islanders from Monday 30 November.